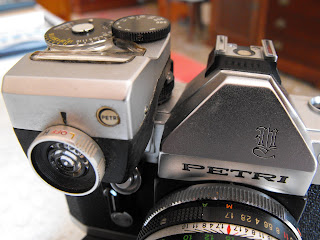 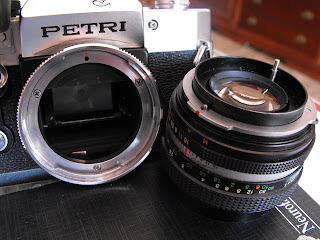 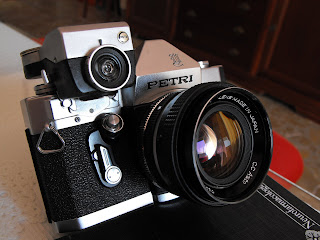 Aaarrgh! I had seen so many Petri screw-mount lenses that I thought I was getting another classic M42 mount camera when I 'accidentally' bought this handsome devil. BUT NO! Unlike the later FT series, this descendant of the Petri Penta, the VI (aka V6), has an exclusive Petri bayonet mount that is similar to the Pentacon 6 mount. Rats! A one-off, something I was trying to avoid. And yet, I can't help but be charmed by this little classic...

Kuribayashi Petri was reportedly the first company in Japan to manufacture SLRs. I think their first SLR was the Petri Flex and this was a continuation of the later Petri Penta line. There were several popular models and they sold well for many years - this model, the TTL, and the FT were a few popular models you can still pick up for a song, they're still going strong (why, that's half a song right there). Some with a Petri bayonet mount, some with Pentax screw (M42). Kuribayashi Petri also made lenses for other mounts such as the Nikon rangefinder, and were an occasional OEM for other companies such as Vivitar. Originally founded as Kuribayashi Seisakusho back in 1907. Later (sometime in the 70s I believe) as the company became less financially solvent they were purchased by De Jur and didn't last long after that.

Speaking of history, there exists a book on the history of Petri cameras called "Kuribayashi Petri Cameras" by John Baird. I haven't seen it around - I'm sure it's out of print and hard to find - but I would love to read it, if anyone has it and wants to let me borrow it I'll read it and send it right back :)

Back to the camera itself -- this is a sweet little SLR hailing from what I generally refer to as the golden age of manual cameras (the mid-60s) Build quality on a par with my Yashica TL Super. Ergonomical front-mounted shutter release, bright viewfinder, and tight feel are notable features. Also the light seals are string and felt like Praktica. Cool! Lens is sharp but somewhat flare-prone. Very soft wide open except in the center (see sample). BTW T-mount and screw-mount adapters are available to mount T-mount lenses and screw-mount (M42) on Petri bayonet. They come up from time to time on ebay.

NOTE - I did pick up an M42 adapter, and I have a warning for y'all... The adapter itself is simply a ring with tabs on the outside and threads on the inside, with an alignment pin to hold it in place while you turn the locking collar, very elegant. The catch is that the locking collar on the camera prevents most M42 lenses from actually screwing down into the threads, it protrudes too far!

The only way I got around this was to use a 2x converter, which is narrow enough to fit inside the locking collar. So it's only marginally useful. Viz the result:

Footnote - there was a subsequent V6 II with a hotshoe, sometime around 1969 or so I believe.

Repairs
Oil on the aperture blades meant that the blades wouldn't stop down in either auto or manual mode... as usual some Rosonol lighter fluid on some Q-tips did the trick. Also while I was in there I confirmed the 6-element 4-group configuration.

A very strange thing happened while I was shooting test roll #2 - The shutter started tripping irregularly, very slowly, like it was all gummed up. I would press the release and wait... and then it would trip. When I finished the roll I tried it out again and couldn't reproduce the problem, either without film or with the scratch roll I use for checking cameras. No sign of that now, odd! Maybe it was a piece of grit in the mechanism that worked itself out.

Tips & Tricks
IMPORTANT - when loading film, make sure the leader goes through two of the slits in the takeup spool, and that when winding it goes all the way around and gets trapped before you close the back. Otherwise the leader can slip out when you wind and though the film will advance, the leader will get stuck somewhere it shouldn't.

Other notes - the film door opens with a latch on the side, not by lifting the rewind knob. The X-sync is a separate detent between 1/30 and 1/60 on the shutter speed knob. Don't know why. There is a place on the front for a shoulder mounted accessory meter not unlike its contemporary Nikkorex F. I've seen a photo of it, it's a monster.

No meter at all, but that means no batteries to worry about! Bayonet mount is like Pentacon 6, a retaining ring on the camera turns to lock and unlock the lens, which merely slides straight into the mount and does not itself turn.


The innovative soft-touch shutter release, like many of the shutter releases of the time (including the Yashica J7 & TL-Super), releases in two stages, first the aperture closes and then the shutter snaps. Here, though, the mirror flips in the first stage so if you don't firmly press the shutter release all the way to the end, you'll lose sight of your subject! This coupling also results in the occasional jam that you are expected to manually release by simultaneously pressing the back of the mirror and the shutter release lever (according to the Petri Penta manual).
Publicado por Alfonso Vivas